The United States Mint has created annual sets of uncirculated coins for collectors widely known as Mint Sets since 1947. Amidst a few interruptions and several changes in format, this popular collector offering continues to the present day. The useful numismatic product allows collectors to have one example of each coin issued for circulation within a complete set issued by the US Mint. 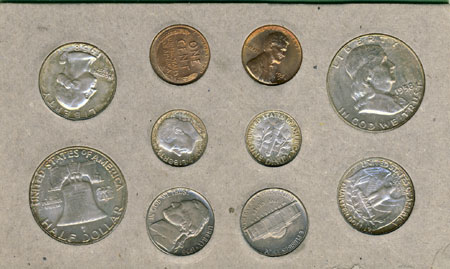 The first generation of sets issued from 1947 to 1958 included two examples of each coin struck for circulation and are sometimes referred to as double mint sets. These were typically issued in low numbers and can now be difficult to find intact and in the original packaging. Those sets encountered in the original packaging, which consisted of cardboard and paper holders, will generally include coins which have developed tonging over time. This type of original toning can be desired by many collectors and can sometimes exhibit attractive rainbow hues.

The next generation of sets issued from 1959 to 1964 came in flat packs similar to the packaging developed for the Proof Sets. Two cellophane packs contained a single example of each coin issued for circulation and were placed within an envelope marked with the date of release. After this run, the issuance of typical Mint Sets was briefly suspended and for three years, Special Mint Sets were issued instead.

Regular Mint Sets were once again issued starting in 1968 and have continued to be issued annually for each year to date, with the exception of a brief interruption from 1982 to 1983. For the most recently issued sets, the quality of the coins has generally improved and packaging has continued to evolve. From 2005 to 2010, the United States Mint has used a special satin finish for coins included in the annual sets. From 2011 to present, a brilliant finish has been used for the coins.

Some Mint Sets are of particular note to collectors since they contain coins not issued for circulation. This includes the 1970 Mint Set, which includes the 1970-D Kennedy Half, and later sets issued in 1973 and 1981 that include dollar coins not issued for circulation. The 1996 Mint Set included the 1996-W Roosevelt Dime struck at the West Point Mint and issued only in the sets for the 50th anniversary of the coin series.