There was some alteration to the coins included in the 1971 Mint Set (Buy on eBay) compared to the previous year. However, the Eisenhower Dollar, which was introduced this year, was not included as part of the set. The new dollar coin was available to collectors through the typical channels of circulation or in special 40% silver uncirculated or proof versions from the US Mint. 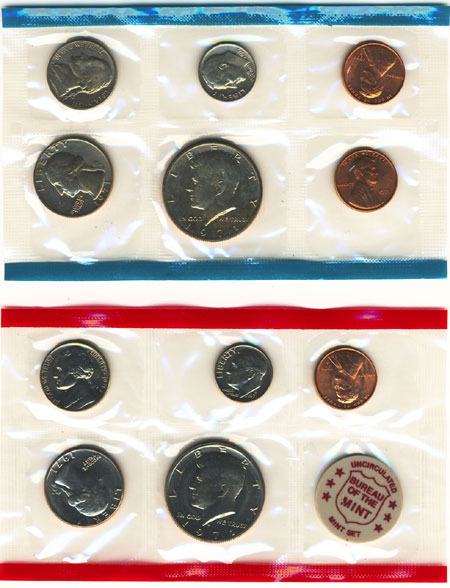 Each 1971 Mint Set included a total of eleven different coins, an increase of one coin compared to the prior year. This added coin was issued since the Kennedy Half Dollar was struck at two different mint facilities that year. Notably, this was the first year that the denomination was struck in copper nickel clad composition, after having been struck in 40% silver from 1965 to 1970.

Pricing for the set was increased to $3.50, representing an increase of $1.00 over the previous year price. The coins were packaged similarly in two cellophane packs with colored stripes, red for Denver and blue for Philadelphia and San Francisco. The packs were placed between two cardboard inserts and put into a white envelope marked “1971-U.C.” with Treasury Department return address.