For the first time, dollar coins were included in a government packaged uncirculated coin set. The 1973 Mint Set (Buy on eBay) included the Eisenhower Dollars struck at the Philadelphia and Denver Mints. These two additions raised the total number of coins per set to thirteen. 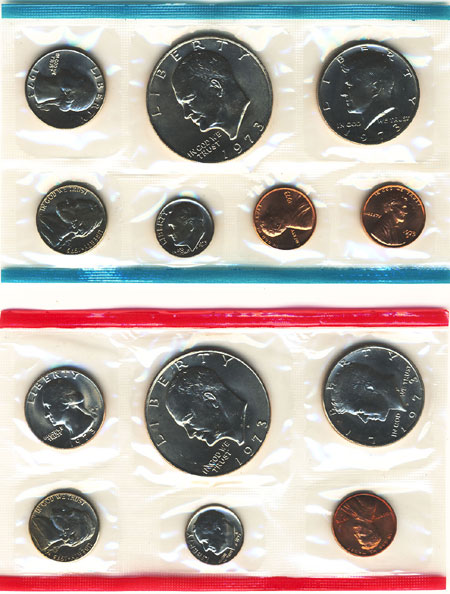 The US Mint issue price for the Mint Set was raised from $3.50 to $6.00. This was justified by the inclusion of the dollar coins, which raised the face value included in the set from $1.83 to $3.83. The higher cost resulted in a big drop off in sales. After the record high achieved in the prior year, sales fell by nearly one million units to 1,767,691.

Notably, the 1973 Eisenhower Dollars were not issued for circulation, creating a low mintage key date for the series. This was a similar situation to the 1970 Mint Set, which included a half dollar exclusive to the set. A few more such instances would occur for Mint Sets in the coming years.

Due to the increased number of coins included in each set, the plastic disc which had been packaged with sets for the prior five years was dropped. The five Denver Mint coins were included in one cellophane with red edges. The six Philadelphia Mint and one San Francisco Mint coin were included in a separate cellophane with blue edges. Both were placed between light cardboard within a white envelope with markings indicating “U.S. Mint” and “1973 Uncirculated Coin”. This was a change from prior years of issue.