During the course of the long running annual numismatic product offering, the style of packaging used for the Mint Set has gone through several transformations. This image gallery provides an overview of the changes that have occurred over the years. 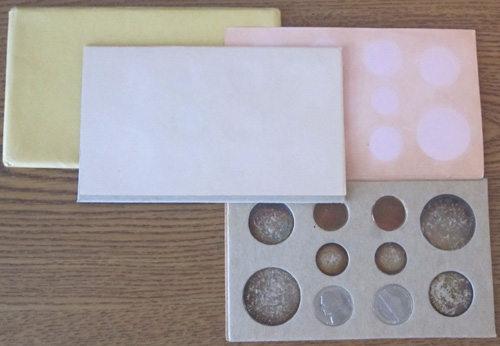 From 1947-1958, the Mint Set included two examples of each coin issued for the year packaged within cardboard holders with paper backing. A separate holder was included for each mint facility and in the event that a mint did not produce a certain denomination, the spaces were left empty. The cardboard holders were placed within a manila envelope, which was placed within an outer mailing envelope containing the customer’s mailing address and the necessary postage.

The acidity within the paper used for the holders frequently imparted toning on coins after years of storage. This toning can range from dark and obscuring to rainbow hued. The latter type of coins can command significant premiums.

In 1959, the style of packaging was changed. A single example of each coin was included within a plastic cellophane sleeve with individual compartments for the coins. Separate sleeves were used for the coins from the Philadelphia Mint and Denver Mint, with the former bordered in blue and the latter bordered in red. A mint token was included within each set. These sleeves were placed between two cardboard inserts and placed within an outer envelope. One or more envelopes were placed in a shipping envelope or box for delivery to customers.

In 1971, the plastic mint token was removed from the Philadelphia side of the set to make room for the additional coins resulting from production of the half dollar at two different facilities and the cent at three facilities. In 1972, the Denver Mint token was also removed, as the set had to accommodate the addition of Eisenhower Dollars from each mint. The plastic cellophanes were still placed between cardboards and placed within an envelope.

The annual Mint Set saw a transformation in 1984, when the bland outer envelope was replaced by a colorful or illustrated envelope which would change each year. The sets also started to include a certificate of authenticity or other promotional inserts from the United States Mint. The coins would still be packaged in plastic sleeves and now include copper coated zinc tokens for each mint facility.

Starting with the 1999 Mint Set, the number of coins included in each set greatly expanded due to the inclusion of the five different designs from the State Quarters series. Packaging was altered to accommodate the increased number of coins. Separate plastic sleeves held the quarters from the Philadelphia and Denver Mint, with colors bordered in white and black. Two more holders held the remaining coins from each mint, still bordered in blue and red. The two sleeves from each mint were placed within separate illustrated envelopes.

In 2007, the Mint Set underwent another change, once again to accommodate an increasing number of coins. This time it was the Presidential $1 Coin Program, which added another four different designs annually. The multitude of coins from each mint facility were placed into separate blister packs with an illustrated fold over. The Philadelphia Mint was themed in its classic blue, while the Denver Mint was themed in red. The two plastic folders were placed within sealed cardboard boxes with the product code indicated on the outside.