Significant change was coming to United States coinage. In many ways, the 1998 Mint Set (Buy on eBay) represented the end of an era. 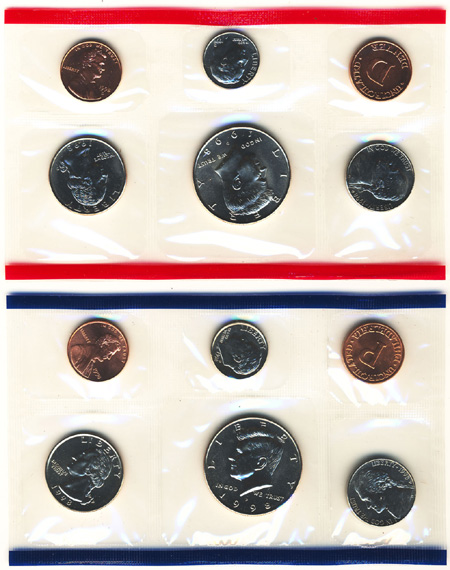 Except for the specially issued Bicentennial issues, current circulating U.S. coins had maintained the same designs for an entire generation. With precious metals content eliminated from circulating issues, there was less incentive for the average individual to pay attention to their pocket change. The State Quarter Program launched in the following year would change all of this, inspiring new collections and subsequent design changes for other denominations.

The 1998 Mint Set contained the final Washington Quarters before the obverse design would be modified and the reverse would feature five different annual designs commemorating the states. The other coins included were the Kennedy Half Dollar, Roosevelt Dime, Jefferson Nickel, and Lincoln Cent. The cost of the set was $8.00 and sales of 1,187,325 were realized.

The ten coins were packaged in two separate mylar packs with tokens representing the Philadelphia and Denver Mints. The outer envelope depicted the circulating coins against a blue background and specifically displayed the reveres design of the quarter. The envelope carried the title “From the United States Mint… The 1998 Uncirculated Coin Set”.

An additional message was included at the bottom of the envelope: “This collector’s set includes two 1998 Washington Quarter Dollars. This is the last time the heraldic eagle reverse will appear until at least 2009.”