A decline in total sales compared to other prior years, makes the 1991 Mint Set (Buy on eBay) a bit more valuable than other recent sets. Originally, the United States Mint marketed and sold the annual coin set to collectors for $7.00. This compared to a collective face value of $1.82 for the ten coins included. The 1991 Mint Set shows a price guide value just above the issue price, although some searching can locate a set cheaper. 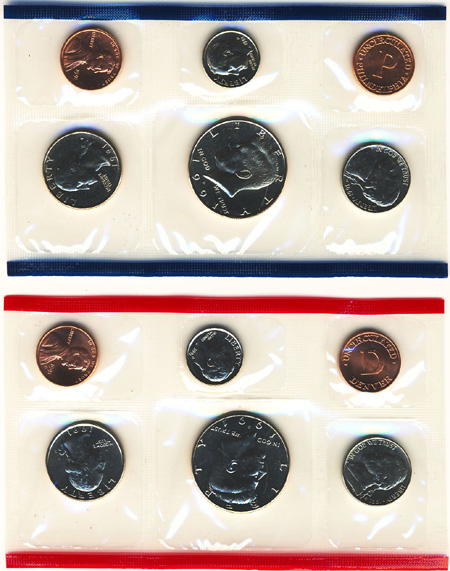 Circulating coins from the Philadelphia and Denver Mint are included. The five denominations issued for circulation are represented, including the Lincoln Cent, Jefferson Nickel, Roosevelt Dime, Washington Quarter, and Kennedy Half Dollar. All Philadelphia Mint coins except the cent carry the “P” mint mark, while all Denver Mint coins carry the “D.”

Besides the coins, tokens representing each mint facility were also included. The tokens included a large mint letter on one side with the US Treasury Department seal on the other side.

Packaging for the annual mint set remained consistent with recent years, with the continued tradition of a newly designed envelope. The coins were placed within a separate plastic pack for each mint facility and place with a certificate of authenticity. The outer envelope had a blue background with some flair elements, and the images of coins and tokens aligned at the bottom.