As in previous years, the United States Mint offered a packaged set of circulating coins for collectors. The 1994 Mint Set (Buy on eBay) contained a total of ten coins with a face value of $1.82. The issue price during the year of release was $8.00. 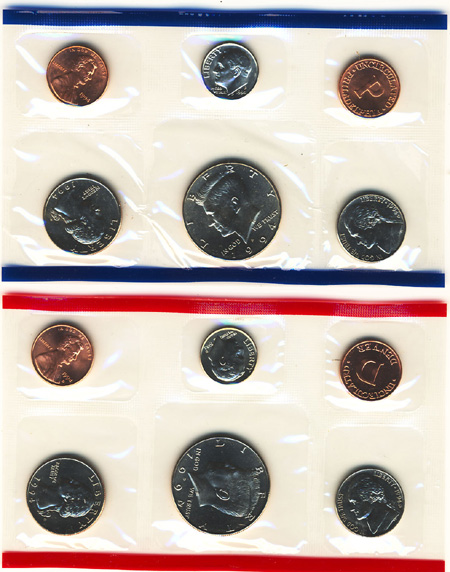 Total sales for the product offering would eventually reach 1,234,813. By comparison, the more popular 1994 Proof Set would sell 2,308,701 units, not including sales from the Prestige Set and silver versions of the set. It was typical for the proof coinage to outsell uncirculated coins, as a long history of the two offerings will support. In later years the divergence expanded.

Each 1994 Mint Set included examples of the Kennedy Half Dollar, Washington Quarter, Roosevelt Dime, Jefferson Nickel, and Lincoln Cent from the Philadelphia and Denver Mints. Additionally, tokens including a large “P” or “D” mint mark were included.

The coins and token from each mint were sealed into separate pliofilm packs and placed within an illustrated envelope. This year, the envelope displayed the five circulating coins and two medals against a light blue background.