The 1978 Mint Set (Buy on eBay) contained a total of twelve coins struck at the Philadelphia and Denver Mint facilities. This set also marked the last year of the Eisenhower Dollar. The large sized dollar coin had been included in the annual mint set starting with 1973. 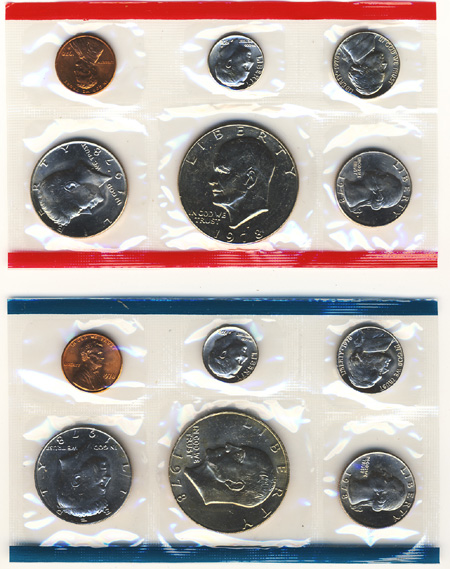 Coins included in the set were arranged with the Philadelphia Mint coins in one plastic packet bordered in blue and the Denver mint coins in a separate packet bordered in red. The coin series represented were Lincoln Cents, Jefferson Nickels, Roosevelt Dimes, Kennedy Half dollars, and the aforementioned Eisenhower Dollars. With one example of each coin per mint, the total face value of the contents was $3.82.

Packaging for the 1978 Mint Sets remained similar to the size and arrangement set in the prior year. The plastic sleeves of coins were placed between two cardboard inserts within an enveloped marked with the contents. The envelope had printing in the upper right corner stating “U.S. Mint 1978 Uncirculated Coin”.

Original issue price for the set was $7.00. The 1978 Uncirculated Mint Set remains relatively plentiful for collectors today, with examples available for purchase on the secondary around the same price originally issued. Not the best return for the original buyers, but perhaps a bargain for the current collector.