Despite having no changes in the contents or format for the product, the 1993 Mint Set (Buy on eBay) had its priced increased compared to the prior year. The United States Mint issue price for the set was $8.00, representing an increase of $1.00. Previously, the $7.00 issue price had been in effect from relaunch of the product line in 1984. 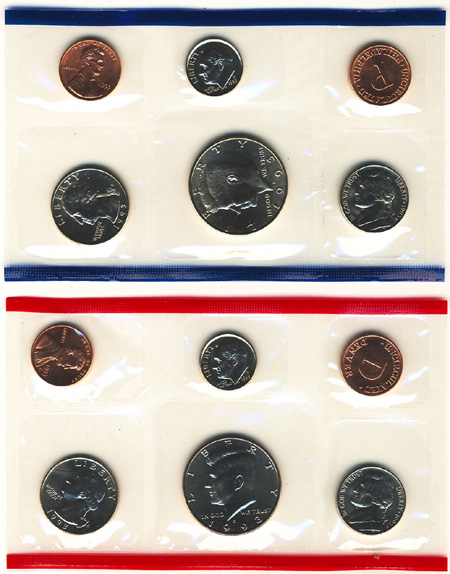 The face value of the coins included in the set was $1.82, comprised of two cents, two nickels, two dimes, two quarters, and two half dollars. Examples of the five circulating denominations from the Philadelphia and Denver Mint facilities. Additionally, two mint tokens, one for each facility, were packaged along with the sets.

Collectors seemed to respond to the price increase by ordering fewer sets. The US Mint sold 1,297,431 of the 1993 Mint Sets, representing a decline of about 200,000 from the previous year’s total.

The five coins from the Philadelphia Mint and the related token were packaged in a cello wrapper bordered in blue. The Denver Mint coins and token were in a separate wrapper bordered in red. Along with a certificate of authenticity, the coins were placed within an illustrated envelope. This year, the design theme was a green background, with images of the coins surrounding text “The 1993 United States Mint Uncirculated Coin Set”.