The standard issue 1976 Mint Set (Buy on eBay) included a total of twelve coins produced at the Philadelphia and Denver Mints. This was the Bicentennial year for America, which was marked by the issue of three denominations bearing special reverse designs. Additionally special proof and mint sets were released containing coins struck in 40% silver. 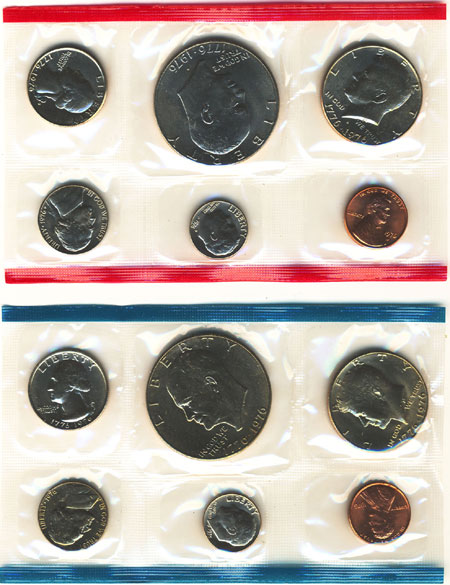 The 1976 Washington Quarter had a reverse design which depicted a Drummer Boy from the Revolutionary era. The 1976 Kennedy Half Dollar featured Independence Hall on the reverse. Lastly, the 1976 Eisenhower Dollar featured the Liberty Bell superimposed over an image of the moon. The obverse of each coin included the dual date “1776-1976”.

The regular 1976 Uncirculated Mint Set included one example from the Philadelphia Mint and one example from the Denver Mint for each of these coins. Notably, the 1976 dollar coins are the type 2 variety, which can be differentiated by thinner lettering on the reverse. Other coins included in the Mint Set are the 1976 P&D Lincoln Cent, 1976 P&D Jefferson Nickel, and 1976 P&D Roosevelt Dime.

Pricing for the twelve coin sets remained the same $6.00 price as the previous year. The coins were packaged in two individual cellophane packs, each containing the coins from one of the mint facilities. These were placed with two protective cardboards in a white envelope with printing “U.S. Mint” and “1976 Uncirculated Coin”.

Like most Mint Sets from the mid 1970’s, these sets remain plentiful for collectors and are priced at relative bargains compared to their face values.