The 1951 Mint Set (Buy on eBay) followed a one year gap in production for the collector product. Even though the US Mint had released the 1950 Proof Set in the prior year, restarting the era of modern proof coinage, they did not issue the mint set containing examples of the coins issued for circulation. 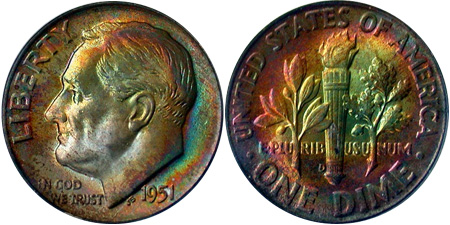 There were a total of 30 coins included in each 1951 Mint Set. This was the largest size for the product since first issued, with two examples of the Lincoln Cent, Jefferson Nickel, Roosevelt Dime, Washington Quarter, and Franklin Half Dollar from the Philadelphia, Denver, and San Francisco Mint facilities. Collectively, these coins carried a face value of $5.46. The United States Mint issued the complete sets for $6.75 each.

Starting this year, more dependable sales records are available for the product. There were a total of 8,654 of the double mint sets sold to collectors. The popularity of the product would increase in future years and eventually make its largest gains when the format was modified in 1959.

Packaging for the 1951 Mint Set consisted of three separate cardboard holders with paper flaps. Each holder contained the ten coins from one particular mint. The paper flaps could be opened on only one side to view the coins. The three cardboard holders were placed within paper envelopes, which served the purpose of mailing to the original recipient and later storage. The relatively high sulfur content in the packaging lends to heavy toning on these early mint sets. If the toning is considered attractive, it can add a premium to an intact original set.