Following the Bicentennial year, coins reverted to the original designs within the 1977 Mint Set (Buy on eBay). The annual set offering from the United States Mint underwent a pricing increase this year. Even though the sets contained the same arrangement of denominations as the previous few years, the price of each set was raised to $7.00. 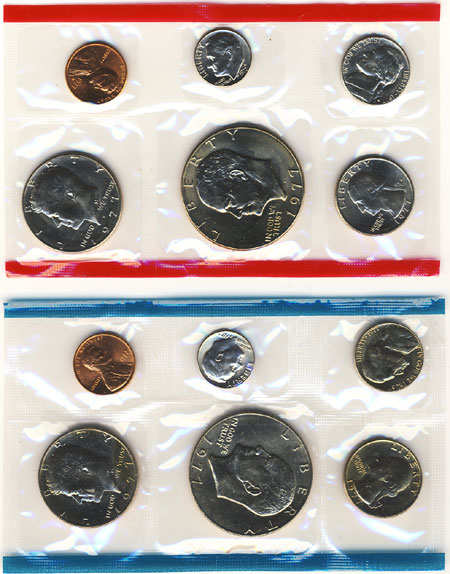 Each 1977 Mint Set included the 1977 P&D Lincoln Cents, Jefferson Nickels, Roosevelt Dimes, Washington Quarters, Kennedy Half Dollars, and Eisenhower Dollars. These coins carried a combined face value of $3.82. All of the coins included in the set were also separately issued for circulation.

Packaging for the annual set underwent a slight change. Primarily the envelope housing the set was slightly larger than the previous version, although the inner plastic cellophane packs retained the same size. The pack containing the Philadelphia Mint coins was bordered in blue, and the pack containing the Denver Mint coins was bordered in red. The white envelope indicated “U.S. Mint 1977 Uncirculated Coin”.

These sets are quite plentiful for collectors today. With a little bit of bargain hunting, the 1977 Mint Set can be acquired for around the same cost as the original issue or lower. Cherry picking is possible, as some sets can contain high grade coins that would carry higher values if certified and graded.