The number of 1953 Mint Sets (Buy on eBay) sold to collectors grew to 15,538 units. This was about triple the number sold when the product was first introduced with the 1947 Mint Set. Although the present set is more frequently encountered, in the broader scheme of US Mint uncirculated coin sets, it is still quite rare. 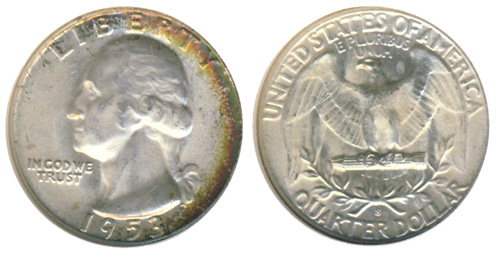 Each set included a total of thirty coins, consisting of two examples of each denomination issued for circulation from each mint facility. In 1953, the cent, nickel, dime, quarter, and half dollar were each struck at the Philadelphia, Denver, and San Francisco mints. The total face value of coins included in each set was $5.46, and the US Mint offered the product to collectors at an issue price of $6.14.

The same style of packaging continued to be used. The thirty coins of the 1953 Mint Sets were placed into three separate cardboard holders, each representing a different mint facility. The two examples of each coin were arranged so the obverse and reverse of each design was visible when the paper flap on the holder was opened.

It is common to find original mint set coins displaying a range of toning, which can sometimes be colorful. Some high grade registry set coins originally come from mint sets, although during this era the quality of coins varied from set to set.