In addition to the regular version of the set, the United States Mint offered the 1976 Silver 3-Piece Mint Set (Buy on eBay). This set included only the three coins issued for the year with reverse designs commemorating the Bicentennial of the United States. 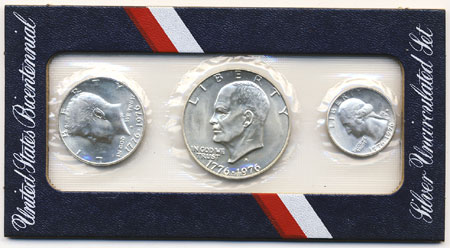 The coins included in the set were each struck at the San Francisco Mint and carried the “S” mint mark. The composition of the coins was 40% silver, the same as previously used for the separately issued uncirculated and proof Silver Eisenhower Dollars sold individually from 1971 to 1974.

The three coins were sealed within a single plastic pack with a white edge. A cardboard insert was included with each set, which could be sealed around the plastic pack by exposing the adhesive backing. These were placed within a red envelope with white printing indicating “United States Bicentennial Silver Uncirculated Set 1776-1976”. Less commonly, some of the sets will be found packaged in a white envelope with red printing of a winter scene at Independence Hall.

A large number of 1976 40% Silver Bicentennial Mint Sets were produced by the United States Mint and sales continued into the following years. During a long period of availability, which lingered until 1982, the US Mint recorded sales of 4,908,319 sets.