The 1970 Mint Set (Buy on eBay) has a few points of interest for collectors. First, it included a coin that was not issued for general circulation, but only available as part of the set. Second, the 1970-S Lincoln Cent included in the set could occur in the scarcer small date variety. 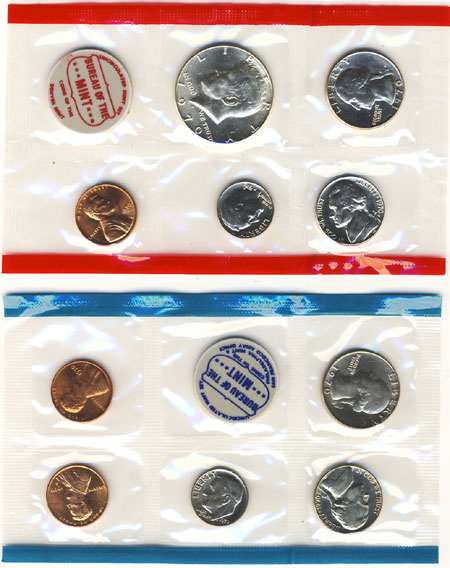 Each set included a total of ten coins, struck at one of three different United States Mint facilities. The original issue price for the sets was $2.50 compared to a face value of $1.33. In total, collectors would purchase more than 2 million of the sets.

Contents of the 1970 Mint Set included the cent, dime, and quarter from the Philadelphia Mint; cent, nickel, dime, quarter, and half dollar from the Denver Mint; and cent and nickel from the San Francisco Mint. The 1970-D Kennedy Half Dollar included in the set was struck in 40% silver and importantly was not issued for circulation. This created a low mintage key date for the recently released series and a draw for many collectors.

Packaging for the sets remained similar to the prior years with coins from the Philadelphia and San Francisco Mint sealed in a cellophane with a blue stripe, and coins from the Denver Mint sealed in a pack with a red stripe. These were placed between pieces of cardboard within a white envelope marked “1970 U.C.” Additionally, the Treasury Department name and address was listed on the top left of the envelope.