The 1981 Mint Set (Buy on eBay) has been viewed as a key issue since its initial release. The set contains three coins, which were not issued for circulation, but only struck for inclusion within the sets. Similar situations would occur on a few other occasions and each of these sets carries a certain mystique. 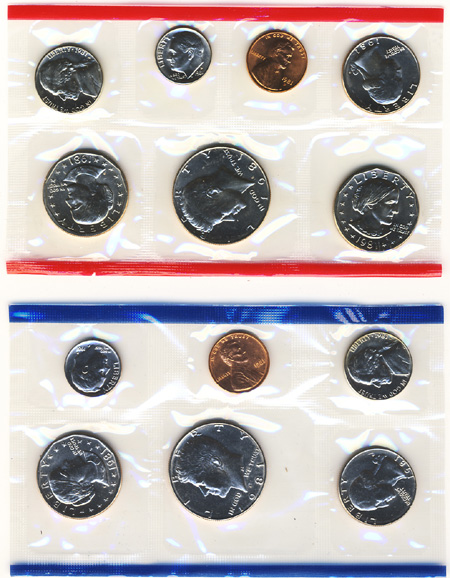 After the Susan B. Anthony Dollar failed to circulate with any degree of success, production was stopped in 1980 with more than enough coins remaining in storage to handle the minimal public demand. For what was long considered the final year of the series, the 1981 Susan B. Anthony Dollar was struck only for inclusion within the 1981 Uncirculated Mint Set. Eighteen years later, the series would reprise within one final issue.

Besides the noted dollar coins, each set included circulation strike coins from the Philadelphia and Denver Mints for the cent, nickel, dime, quarter, and half dollar. These were packaged in cellophane packs within a plain white envelope.

Unknown at the time of issue, no Mint Sets would be issued during the following two years.