This year, the annual uncirculated coin set would experience its lowest sales in more than three decades. The 1995 Mint Set (Buy on eBay) had final audited sales of 1,038,787 units, representing a drop of about 200,000 compared to the prior year. This set had been viewed as a key date to a complete collection of Mint Sets, although its status and value have dropped following lower sales of subsequent years. 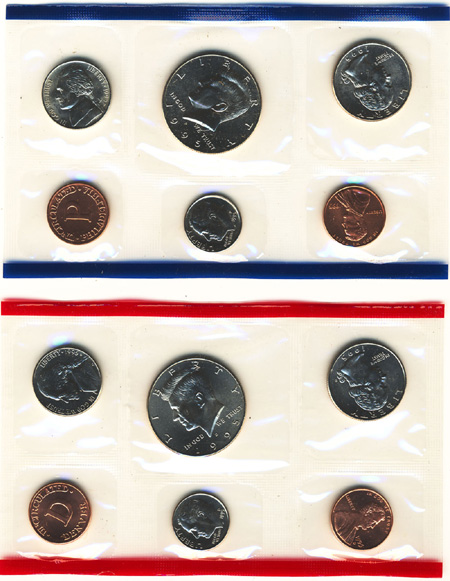 The general characteristics of the set remained unchanged from recent years. The 1995 Mint Set included uncirculated examples of the circulating coins issued during the year from the Philadelphia and Denver Mints. The coins included the half dollar, quarter, dime, nickel, and cent. Additionally, there were two mint tokens included to represent each mint facility.

Original issue price set by the United States Mint was $8.00 per set for the $1.82 face value worth of coins. For present day collectors, the 1995 Mint Sets can be acquired for slightly more than the issue price, although at other times they had been valued more dearly.

The five coins and token from each mint facility were sealed within a separate pliofilm pack. Each coin was separate within its own compartment to prevent contact with the other coins. The two packs were placed within a vividly illustrated envelope marked “The 1995 United States Mint Uncirculated Coin Set”.