Production of standard style sets resumed with the 1968 Mint Set (Buy on eBay). For the previous three years, so-called Special Mint Sets had been issued in lieu of separate annual Mint Sets and Proof Sets. The packaging was changed slightly from the last appearance of the set a few years past. 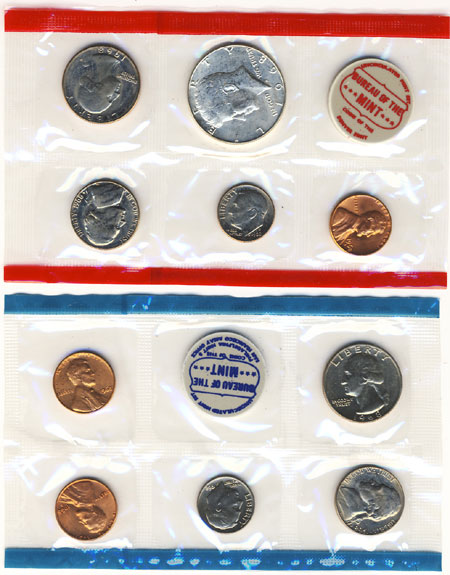 The 1968 Mint Set included a total of ten different coins struck at three different mint facilities. This was comprised of Lincoln Cents (P, D, S), Jefferson Nickels (D, S), Roosevelt Dimes (P, D), Washington Quarters (P, D), and one Kennedy Half Dollar (D). Notably, the half dollar included in the set was struck in a composition of 40% silver.

The Philadelphia Mint coins and the single Lincoln Cent struck at the San Francisco Mint were placed within a cellophane pack with a blue stripe and the Denver Mint coins were placed in a pack with a red stripe. The two were placed between sheets of light cardboard within a white envelope marked “1968 U.C.” with the Treasury Department address.

Sets were offered for $2.50 each compared to the $1.33 face value. Quality of the coins can vary greatly and often the Kennedy Half Dollar will be found with cloudy toning. Total mintage for the 1968 Mint Set was 2,105,128, a big boost from the production level of the prior Special Mint Set and last issued regular Mint Set.