The 1975 Mint Set (Buy on eBay) remains a unique issue during the course of the annual set offering from the United States Mint. It is the only Mint Set that includes coins bearing a date different than the date of the set. This is due to the fact that 1975-dated quarters, half dollars, and dollar coins were not produced. 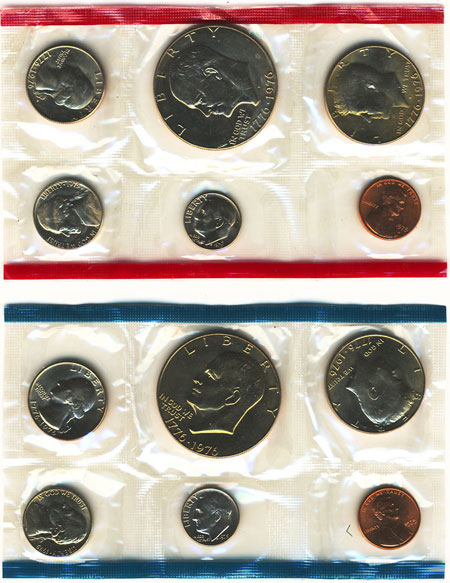 To celebrate America’s upcoming Bicentennial, these denominations would be issued with a new reverse design and the dual date “1776-1976”. In anticipation of high demand for the coins, production began in 1975. Accordingly, the bicentennial coins were included in the 1975 Uncirculated Mint Set.

Another unique aspect of this set is that it only includes coins from the Philadelphia and Denver Mints. Starting this year, the San Francisco Mint no longer produced coins for circulation bearing the “S” mint mark. From 1968 to 1973, the facility had produced at least one circulating coin, with other production taking place for coins included in the annual Proof Sets.

The contents of the 1975 Mint Set included the following:

The 1976 Eisenhower Dollars contained in the 1975 Mint Set are the Type 1 version. This variety exhibits thicker style lettering on the reverse design.

The 1975 Mint Sets had the coins packaged in two individual flat packs. The Philadelphia Mint coins were in one pack with a blue edge and the Denver Mint coins were in a second pack with a red edge. Both were placed between two pieces of cardboard within a white envelope marked “U.S. Mint 1975 Uncirculated Coin”.