The contents of the 1974 Mint Set (Buy on eBay) remained much the same as the prior year. The addition of the Eisenhower Dollars had brought the total number of coins per set to thirteen with a face value of $3.93. Sales experienced a small boost from the prior year with nearly 2 million sets sold at the original issue price of $6.00 per set. 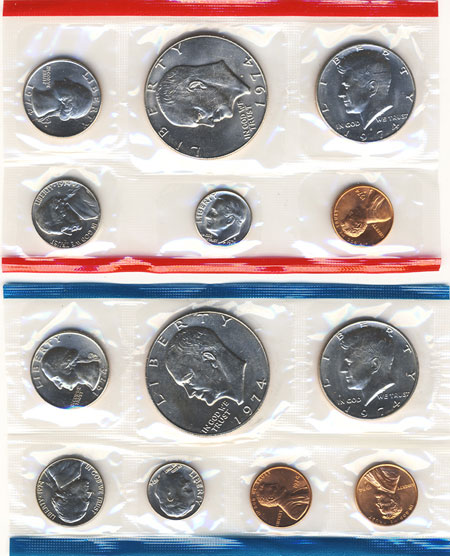 Each 1974 Mint Set contained three Lincoln Cents (P-D-S), two Jefferson Nickels (P-D), two Roosevelt Dimes (P-D), two Washington Quarters (P-D), two Kennedy Half Dollars (P-D), and two Eisenhower Dollars (P-D). The dollar coins were also issued for general circulation, unlike the situation which had occurred in 1973. Eisenhower Dollars struck at the San Francisco Mint in 40% silver in proof and uncirculated versions were separately sold by the US Mint to collectors at $3 (uncirculated) or $10 (proof) each.

Packaging kept the same format with the P and S minted coins in a cellophane flat pack with blue striping and the D minted coins in a pack with red striping. These were placed between cardboard and within an envelope marked at the upper left corner with “U.S. Mint” and “1974 Uncirculated Coin”.

The 1974 Mint Sets remain in abundant supply for today’s collector, usually changing hands right around the same price as originally issued more than three decades prior.