The 1992 Mint Sets (Buy on eBay) sold just over 1.5 million units during the time it was available from the United States Mint. This represented an increase of about 150,000 units from the prior year. 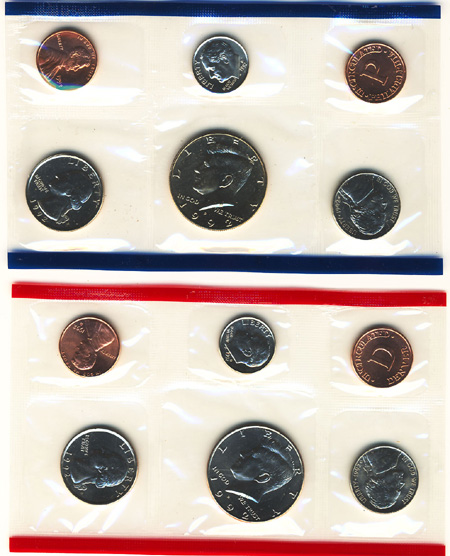 For the following and all subsequent years, sales for the annual product would remain below the 1.5 million mark, possibly as a consequence of increased pricing and the lackluster secondary market performance for the product. For present day collectors, Mint Sets represent an accessible and cost effective method for acquiring mint state coins from each year.

Each 1992 Mint Set contained the following ten circulating coins from the Philadelphia and Denver Mints:

The coins from each mint facility were included in a separate plastic cellophane wrap with a mint token. These were placed along with a certificate of authenticity in an illustrated outer envelope that had become the trademark of the annual offering. Each year a slightly different illustration was presented.

Printing on the envelope indicates the contents “The United States Mint Uncirculated Coin Set with D and P Mint Marks”. The US Treasury Department seal and images of the coins appear to the left.