In contrast to some of the other surrounding sets, the 1986 Mint Set (Buy on eBay) is generally sold at a premium to the original issue price. This is attributable to the dramatic reduction in sales experienced for the set, which translated into a lower total mintage for the set. The mintage of 1,153,536 represented the lowest in more than twenty years. 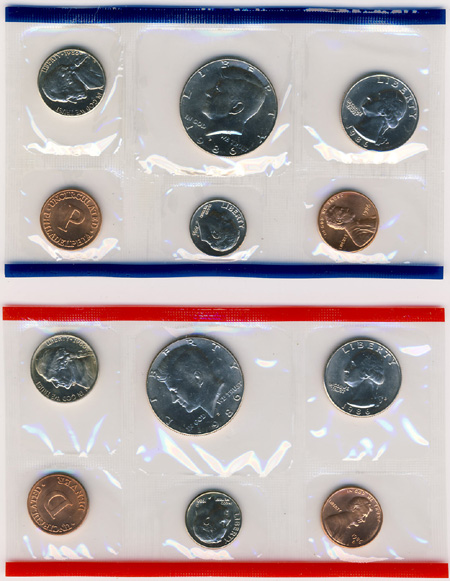 The ten coins included in the 1986 Mint Set have a face value of $1.82 and consist of the Philadelphia and Denver Mint versions of the Lincoln Cent, Jefferson Nickel, Roosevelt Dime, Washington Quarter, and Kennedy Half Dollar. Additionally, there are two tokens bearing the large letters “P” and “D” to represent each mint facility.

Packaging for the set consisted of two cellophane packs, containing coins from each of the two mint facilities, placed with a certificate of authenticity, within an illustrated envelope. The envelope was colored white at the top and tan at the bottom, with red, white, and blue as a dividing line. Stylized printing indicated “United States Mint”, “1986 Uncirculated Coin Set”, “with D and P mint marks”.